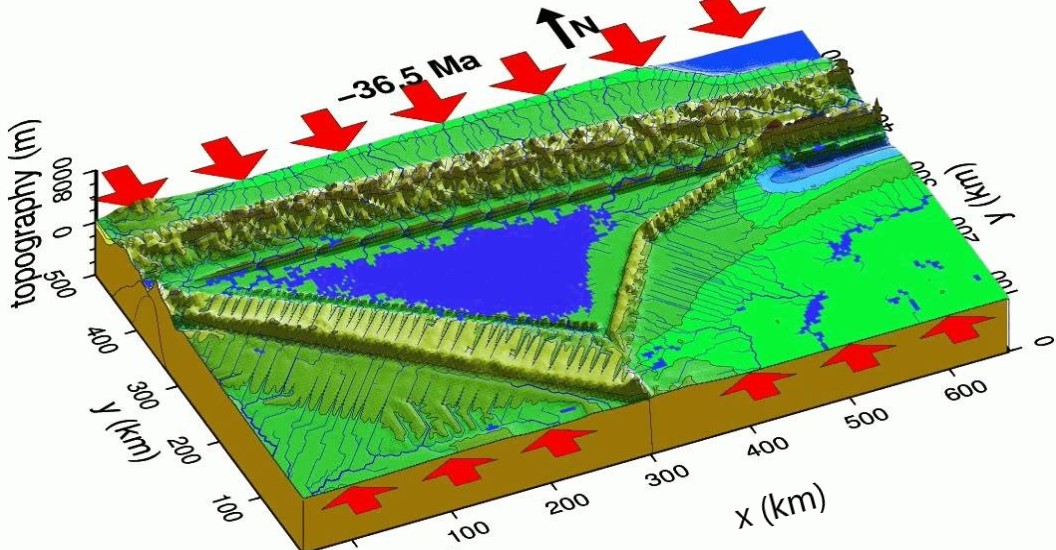 ‘Mente et malleo’ (Mind and hammer) is written on the souvenir plates me and my fellow students received at the end of our first geological fieldwork. After four weeks traversing the hills around the Spanish village of Aliaga armed only with our hammer and coloured pencils these seemed to indeed be the most important tools at a geologist’s disposal. Despite the romance of these simple tools, over the years I’ve learned to appreciate others just as powerful: numerical models.
A model, in scientific terms, is a simplification of nature aimed at helping us understand the processes that formed the complex structures we find in on our planet by reproducing them, from the very small scale to the global one. The methods used can range from a conceptual model, hypothesized from first principals and dreamed up by the scientist, to very detailed numerical models, which are mathematically based.
In geology, models are a crucial tool for understanding those features of the earth which lie beyond our spatial and temporal limitations (that is to say, the vast majority!)
After all, most of the earth’s interior is beyond the range of boreholes and crucial parts of geological history are not recorded in the rocks we see due to the destructive nature of the orogenic cycle, and laboratory experiments can only run for a limited time (a number of years at the most).

The first analog modelling experiments were performed in the early 19th century, when geology was a very young science. Inspired by James Hutton’s recently published Theory of the Earth, scale models were constructed from sand and clay and compressed horizontally, in order to understand the structures formed by ductile and brittle deformation that could be seen in the field by analyzing the resulting cross-sections. This method is still widely used, although now with more sophisticated materials in order to allow for proper scaling. At the most extreme scales, like subduction zones, mantle convection, or the microscopic, analog modelling has limitations which call for methods not constrained by the size of our laboratories.

Numerical models are computational simulations of nature, based on mathematical equations. The most fundamental physical laws such as gravity, thermodynamics and wave theory can be used to simulate processes such as the sinking of lithospheric slabs into the mantle and the propagation of seismic waves after the occurrence of an earthquake. Models solve the governing equations in small portions of the model domain, or finite elements, within which the input properties of the model are averaged so the equations can be solved discreetly. With the increase in computational power over the years the amount of these elements in a domain can be greatly increased, bringing us closer and closer to reality, and allowing us to add more details to these models.

Of course, models require more inputs than just the laws of physics. In order to apply them to geological scenarios we need to constrain the properties of the natural materials they are simulating and impose other boundary conditions. Field data and physical experiments supply the required information and are in turn used to check and improve the results of numerical models. The results of a model after all do not stand on their own but must be consistent with what we observe in the field and lab in order for us to infer anything about the inner workings of our planet. Sometimes the boundary conditions are difficult to constrain, and we must make judgements based only our limited experience and expectations.
This illustrates the need for a strong cooperation between scientists using different approaches, and is part of what makes the geosciences so interesting.

The Messinian Salinity Crisis has remained enigmatic after 50 years of research partly because of the complexity of the physical processes driving it, and the lack of data as strata are eroded, discontinuous due to deformation, and difficult to correlate between the on- and offshore.
Numerical modeling can therefore play an important role in solving some of the mysteries surrounding the MSC, from hydrodynamic box models aimed at understanding the exchange of water between different (sub)basins in the Mediterranean, to flexural-isostatic models which reconstruct the depth of the basins by looking at the effect of the rapid variation of load on the crust by evaporite deposition and sea level variation, pushing the underlying crust down into the more fluid mantle underneath.

Modeling is not only a useful tool, but also a strong exercise in process-based thinking, allowing no shortcuts and requiring critical analysis to prevent oversimplification. The outcome can be surprising and inspire new, never before imagined lines of thinking. This feedback between scientists and their tools can be both frustrating and fun, but has definitely improved the understanding of the world around us.