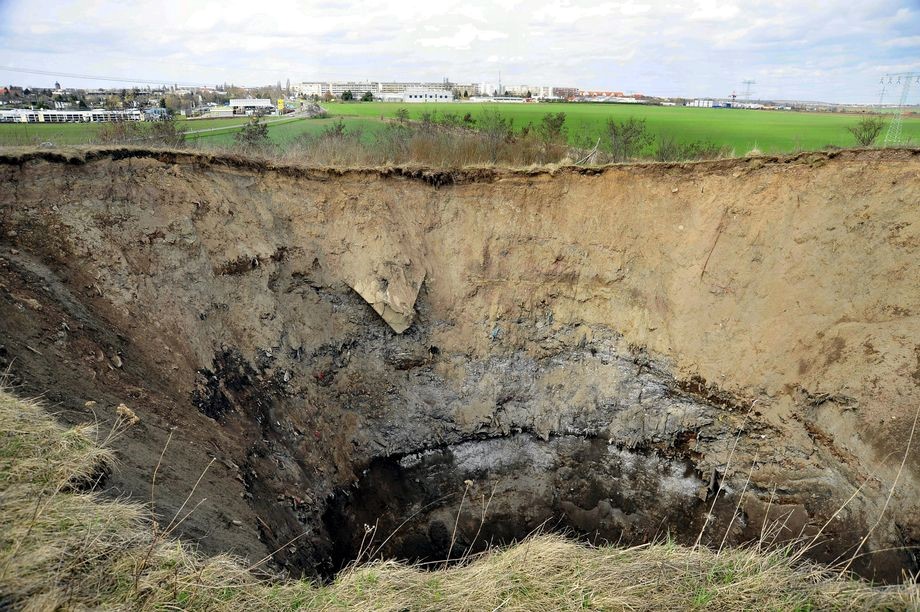 Giant, halite-dominated salt accumulations are common on Earth. Throughout the human history, they have been mined for their salt that was used for animal nutrition, food conservation, de-icing etc. Compared to the other rocks, halite itself is quite a peculiar material characterized by:

In response to long-term geological stress, it undergoes plastic deformation, in other words it flows, within a more brittle subsurface. This results in complex geological structures that have drawn the attention of the oil and gas industry in the 20th century (you can see here a brief history of salt tectonics). Its properties mentioned previously make halite layers an excellent seal against fluids migration. The structures shaped by salt tectonics provide traps where the fluids accumulate, allowing the formation of a fluid reservoir. If nowadays these reservoirs are primarily investigated for oil and gas resources, they can also be used for underground storage of C02, nuclear wastes, compressed air and hydrogen energy storage, which are coming increasingly important topics for the energy transition (Figure 2).

Whether it is for fossil energy extraction or energy storage, drilling through salt layers requires a precise knowledge of the subsurface to guarantee the project’s safety and sustainability. The main concern is over-pressured zone that are common below salt layers (Figure 2). They represent a major risk to sub-salt drilling operations and thus need to be accurately mapped. For long-term underground storage projects salt’s mobility can also endanger the reservoir’s integrity: rising salt diapirs and gravity-driven gliding can disactivate the trap. Salt layers can also fracture, hereby becoming permeable to groundwater in which it dissolved easily, causing the reservoir’s seal to leak.

For these reasons, salt tectonics has become an important topic in Geosciences driven by the Oil and Gas industry. Researchers are working on unravelling the processes of salt-related deformation and sub-salt overpressure development in salt giants. They are trying to build models explaining the salt giants’ complex architecture, to determine what sensitive parameters control the halokinematics and how these impact the reservoir’s integrity.  The objectives are:

It is worth knowing that salt giants are not studied only for their reservoir properties, they can also be a natural hazard: active halokinesis of halite and karstification of the salt and gypsum layers can cause the development of sinkholes and landslides in shallow salt deposits (Figure 3). Lastly, salt giants also have a large impact on Earth’s surface heat flow distribution due to its high thermal conductivity, providing a new geothermal exploration target for higher energy recovery at shallower depths (Figure 4).

You might think understanding salt tectonics is primarily geologists’ business, but it is a complex field of research that also involves geophysicist, physicists, mathematicians and numerical modelers. Imaging the complex architecture of the salt structures has only become possible with progress made in seismic acquisition and processing for instance (see here), while explaining how these structures were formed required experts in physics and modelling. Nowadays, innovative modelling methods and increasing computing power allow us to quantitatively appraise the influence of different Earth’s properties on salt tectonics. Nevertheless, there are still unresolved questions regarding triggering and driving mechanisms of salt tectonics.

In my next blog’s post, I will give you an overview of what is happening currently in salt tectonics research and why the Mediterranean Salt Giant is a great is a unique salt giant where the SALTGIANT ETN is focusing its efforts. This will be based on the “Salt Tectonics: Understanding Rocks that Flow” conference organized by the Geological Society in London last October 2019.

Figure 1 (cover image): Photo of the sinkhole of Bernburg, Germany. It appeared following the wash-out of the salt by percolating water that caused collapse of a salt dome. If Salt domes can collapse should they be used for storage? (source: https://www.spiegel.de/fotostrecke/salzstock-eingebrochen-das-loch-von-bernburg-fotostrecke-53457.html).

One thought on “From Fossil fuel exploration to underground storage and geothermal energy: Why do we care about Salt tectonics?”