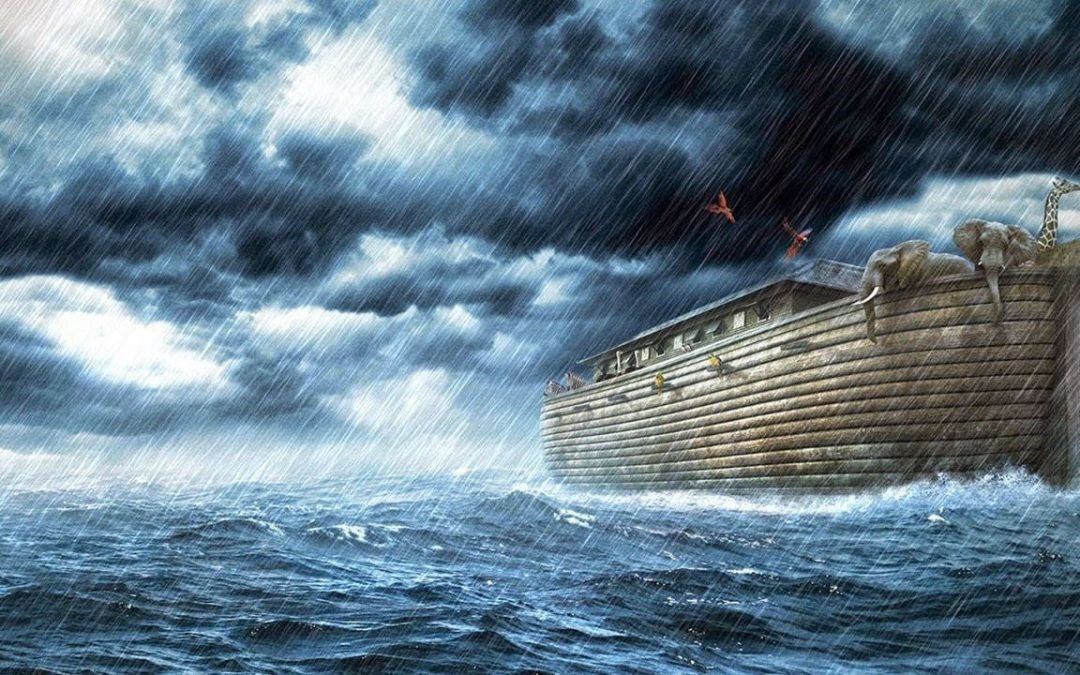 Noah’s flood: did something similar happened in the Mediterranean 5.33 Million years ago?

When mankind started populating Planet Earth, it was immediately encountered with extraordinary events that it could not fully explain or understand on its own such as great storms, lightning and thunder, earthquakes, volcanic eruptions, floods…. However, like we continue doing today, it is in our nature to seek answers and explanations for numerous natural phenomena; for our ancestors in the majority of cases these answers came from bigger forces, invisible to the naked eye and in possession of inexplicable powers which could manipulate the elements. This is when mankind started worshiping these forces – different Gods – which lead to an immensely vast legacy of legends, myths and sacred texts that, if read closely, can hide descriptions of real natural events and catastrophes [1].

A bit of catastrophism…

It’s a regular day in the Neolithic, somewhat around the year 6400 BC [2,3]. Imagine to be calmly walking around your settlement in the proximity the Bosporus strait (unaware that this would be probably your last walk) and you suddenly hear an inexplicable noise, comparable to the one next to the Niagara Falls. At the time, in front of such a site you are in shock and do not realize that you are one of the few to testimony of one of the biggest flooding events in human history.

How was the climate at that time? We were, climatically speaking, just coming out from a cold, glacial phase called the Younger Dryas which happened between 12.800 and 11.500 years ago (the name derives from the wild tundra/alpine flower Dryas octopetala that was present at the time) and entering a new warmer geological epoch the Holocene, the one we live in today.  An especially warm phase of the Holocene was the Atlantic period (from 6000 to 3000 BC, when the average annual temperatures increase of approximately 7˚C in just a few years [4]).
During the cold phase of the Younger Dryas, the sea level was lower than today, making possible a land connection at Bosporus between Europe and Asia. The Black sea was not really a sea, but a huge lake supplied by the Danube, Dnepr and Don rivers. On its coast there were present early settlements of hunters and gatherers, first villages of Neolithic fishermen and farmers started appearing. At the time, however, the Black Sea coastline was one hundred meters lower than the Mediterranean. As the melting of the glaciers was raising the level of the Mediterranean (Atlantic period) at a faster rate than the level of this inland sea/lake, sea water started to impact the Bosporus with a progressively increasing decision, until at a certain point it succeeded in breaking it down. At that point, due to the difference in height between the two seas, the salt water of the Mediterranean began to pour into the Black Sea in form of a large impetuous waterfall. Something similar would have happen to a large dam if it could no longer bear the weight of the water mass. The process lasted for months, inundating hundreds of square kilometers of inhabited land and once the water had filled the Black Sea basin up to its rim, the flow stopped. This represents one of the first natural events of which it is possible to find written documentation, and which has become the subject of various stories and legends: the commonly known Universal Deluge.

What can we find in literature?

Many of Universal Deluge legends contain similar characteristics: a plague sent by supreme authorities as a punishment for human sins, a warning of the arrival of a catastrophic flood and the suggestion to group each animal form into a large vessel to preserve life and diversity also after the calamitous event. The Jewish legend of the Old Testament of Noah’s Ark is one of the most widespread legends about the flood, but similar stories can also be found in more ancient writings such as those of ancient Babylon like the story of Gilgamesh, in the Mesopotamian myth of Atrahasis and even in the Genesis. In fact, there is a striking resemblance between the initial sentences of the Babylonian creational poem Enuma Elish:

When on high the heaven had not been named,

Firm ground below had not been called by name,

Naught but primordial Apsu, their begetter,

(And) Mummu Tiamat, she who bore them all,

Their waters commingling as a single body,[5]

And the verses contained in the first Genesis chapter:

The two texts not only share the same line of events, but at the same time incorporate a primitive sea monster as a connotation of the deep abyss called Tehom or Tehomot in Hebrew and Tiamat according to the Acadian empire [2]. The Babylonians believed that at the beginning of the creation there was a struggle between Marduk (king of the gods) and the sea monster Tiamat, which ended the chaos thanks to the victory of the god [1]. Marduk created the cosmos from the dismembered body of the monster while he placed one half in such a way as to prevent the waters from flooding the Earth. Similarly, in the Mesopotamian myth, the god Hadad, in Sumeria called Immer, in Babylon also Rammān, under order of Enlil (lord of storms) infuriated with humanity which greatly increased in number and become a disturbance, for him so unbearable that he decided to make it perish. The god of water, Enki, however, warned the hero of the myth Atrahasis who will be saved from the catastrophe:

Dismantle the house, build a boat,

Reject possessions and save living things.

He opened the sand clock and filled it,

He told him the sand (needed) for the Flood was Seven nights’ worth.

[…] Adad kept bellowing from the clouds,

The winds were raging even as he went up

(And) cut through the rope, he released the boat.[7]

The texts dedicated to the topic of origin are the ones that contain the first written testimonies of exceptional events which, today, are attributed to geological changes or climatic events that affected our planet. The same theme was later addressed in Greek mythology; in fact, in the myth of Deucalion and Pyrra it is possible to find a similar plot. When Zeus created the third lineage of men, the Bronze one, it ended up being a lineage of terrible and violent men who were devoted only to the wishes of Ares. Consequently, the king of the gods decided to annihilate the lineage but Deucalion, warned of the fact by his father Prometheus, built an ark and embarked with his wife Pyrra. The two were saved and became the ancestors of humanity.

He with his wife were only left behind

of perish’d Man – they two were human kind.

The mountain nymphs, and Themis they adore,

and from her oracles relief implore.

The most upright of mortal men was he;

the most sincere, and holy woman, she.[8]

In more recent times, Giovan Battista Vico (1668 – 1744), Italian writer, in the second book of his Scienza nuova (New science), addresses once more the Universal deluge topic in the chapter entitled Del diluvio universale e de’giganti (About the universal deluge and giants), where he describes the decadence of humanity after the universal flood. In his story, the descendants of Noah are reduced to primitive beasts with an enormous body that inhabit the “great forest of the earth”, they are real giants [9].

And now try to imagine such a scenario for the Zanclean re-flooding, it is a shame that there were no humans to testify this event, therefore the only clues we can use are the geological once. Some authors believe that the event that marked the end of the Messinian Salinity Crises actually was a catastrophic flood similar to this one. Anyhow the nature, magnitude, abruptness and evolution of the flood remain poorly constrained and some even doubt weather it actually happened. Here are some interesting scientific clues and facts:

In favour of a Mega flood and subaerial connection between Africa and Iberia:

Against the Mega flood and in favour of a permanent gateway between the Atlantic and Mediterranean:

If you have an imaginative brain, and having in mind the famous Noah’s flood, you succeeded in picturing this event in your head, its already something. Not even scientists do fully understand the exact dynamics of the re-connection between the Atlantic Ocean and the Mediterranean. Hopefully further research within our SALTGIANT project will shed some light and unravel the mystery.

If we do, we will let you know. Stay tuned.

[7] Atrahasis, Tablet I, from Myths from Mesopotamia by Stephanie Dalley “- Oxford University Press.